Need to speak to an engineer? Contact our team today.

During 1990, the Specialty Vehicle Institute of America (SVIA) with the assistance of the American National Standards Institute (ANSI) published the first standard for ATVs referred to as ANSI/SVIA-1-1990. During 2001, ANSI/SVIA revised this standard referred to as standard ANSI/SVIA 1-2001. The standard was revised again during 2007 and again in 2010 and is referred to as standard ANSI/SVIA 1-2010. According to the standard ANSI/SVIA-1-1990, an All Terrain Vehicle (ATV) is any motorized off-highway vehicle 50 inches or less in overall width with an unladen dry weight of 600 pounds or less designed to travel on four low pressure tires having a seat designed to be straddled by the operator and handlebars for steering control and intended for use by a single operator and no passenger. Width and weight is exclusive of accessories and optional equipment. ATVs are subdivided into four categories as follows:

Youth model ATVs can further be categorized as follows:

ATV’s are straddled and sat on by an operator similarly to a motorcycle. The ATV is controlled utilizing a handle bar for steering, a throttle thumb lever for engine/vehicle speed control, hand levers for the brake and clutch, foot peddle for brakes, a foot gear shifter or hand shifter to change the transmission gears and foot pegs and/or running boards as foot rests.

The first ATVs were introduced to the American marketplace during the 1950’s. These early models utilized a six wheel design and are referred to as an AATV which means Amphibious All Terrain Vehicle. The AATV’s were designed to float and propel themselves on water and could maneuver through swamps and creeks.

According to the Specialty Vehicle Institute of America (SVIA), the first recreational ATV to be introduced into the American marketplace was by Honda during 1970 and was called the ATC90 and was a three wheeler that had one forward wheel for steering and two rear drive wheels for propulsion. Soon after, Yamaha, Kawasaki and Suzuki follows with their 3-wheeled versions. The first four-wheel recreational ATV was introduced to the American marketplace by Honda during 1984 called the TRXTM 200.

We provide the following forensic engineering services for ATV accidents:

Gary is an avid ATV rider. He obtained ATV rider’s training through the ATV Safety Institute. He owns and rides the 2007 Honda Rancher pictured below. 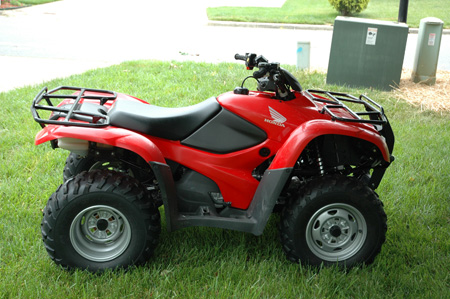