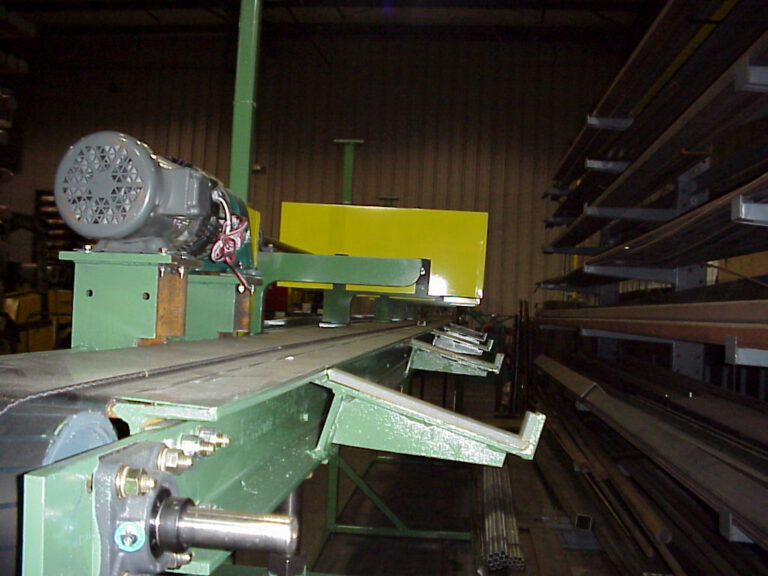 During 1999-2001 while working as a senior manufacturing and process engineer, Gary E. Kilpatrick, PE, DFE designed a special belt conveyor for an existing industrial pre-notch roll forming process. Gary’s new belt conveyor would replace an existing belt conveyor that was problematic. The pre-notch roll forming process produced a slotted “U” shaped channel called “Strut’ which was used during construction projects to hang electrical conduit, piping and lighting systems into the ceiling of buildings.

The existing problematic conveyor was 60 feet long and was designed like a roadway truss bridge made from welded 18 gauge aluminum square tubing. The conveyor structure was designed in two halves and was bolted together at its mid-section. The conveyor was supported at each end by legs bolted or welded to the bottom of the conveyor truss structure. The conveyor would sag at its bolted mid-section causing problems with the racking below. From time to time during setup operations and during a strut product run, a strut channel would exit the roll former or flying shear and veer off at an angle striking the aluminum conveyor truss bending or breaking the aluminum truss elements. Over time, the aluminum conveyor deteriorated more and more to the point where maintenance was forced to patched up this conveyor just to keep the operation running.

Gary’s belt conveyor design criteria was as follows: (1) it could not sag anywhere along its length; (2) the conveyor frame had to be tough to take the abuse from the strut channels and roll former during setup and operation; (3) the conveyor frame and belt height had to be adjustable to fine tune its placement at the exist of the flying shear; (4) the employees asked that the new conveyor incorporate a kick-off mechanism to assist them in safely removing the strut channels from the conveyor belt.

During this conveyor project, Gary purchased and had installed a new Yoder flying shear. He also designed, had built in-house and had installed a strut spraying system to apply a rust preventative (RP) to protect the new strut channels while they sat waiting for distribution to customers.

After approximately 20 years, these conveyors are still in service today because of their rugged design.